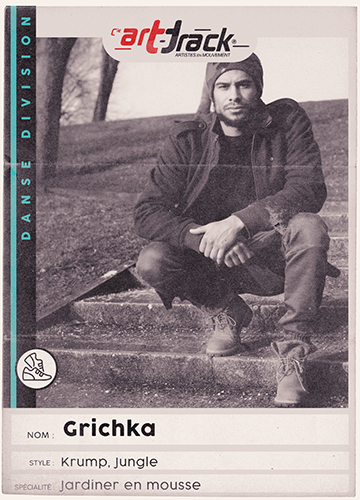 As a child, Grichka was already dancing. He quickly learns all styles, from classical to African dance through hip hop and contemporary dance. At the age of 11, he discovered hip-hop with Kader Attou and Dominique Lisette and joined projects with renowned companies such as Black Blanc Beur, Accrorap and Revolution. He works with renowned choreographers such as Kamel Ouali, Blanca Li, Stephane Jarny, Georges Momboye, Corinne Lanselle for musicals, choreographic pieces, tv sets and video clips or on tours with artists, such as Madonna.

In 2005, through David LaChapelle’s documentary RIZE, he made the discovery of his favorite dance, the Krump, allowing him to better express his personality, his métis roots, his energy and his spirituality. Very quickly, he decided to go back to the sources of this movement and went, in 2006, to where it all began: in the ghettos of Los Angeles. Its integration in 2008 into the NY Madness Fam (Tight Eyez) gives it the status of precursor and initiator of the movement in Europe alongside French and European groups. Grichka competed in numerous solo and team battles, including twice winning the EBS Krump World Championship.

He co-founded RAF CREW in 2007, where he won the HIP HOP World Championships in 2009 and co-choreography “RAF city’z” (2010). He also founded in 2009 the collective “Madrootz“, which brings together many French pioneers of the krump movement but also international leaders. Since 2013 he has been artistic director of the International Illest Battle, an international Krump meeting, the 7th edition of which will take place in March 2019 in La Villette. In 2017, he co-choreographed the short film Les Indes Galantes, by Clément Cogitore.

Teaching Krump and Hip Hop internationally since 2007, he decided in 2019 to offer his artistic vision of krump in a choreographed piece, Birth, to the alongside Pierre-Claver Belleka (Dexter), Arias Fernandez (Joker) and Ludovic Manchin-Opheltes (Kellias).

In 2021, he choreographs in Germany, in association with the TanzKomplizen theater and the association Offensive Tanz für junges Publikum Berlin, A HUMAN RACE, a play that questions structural racism, the whole on Stravinsky’s famous Rite of Spring. In order to transpose and question it in a choreographic creation for the general public but also for adolescent audiences, the aesthetics and the KRUMP movement appeared to be most relevant. The questions raised by the research will be addressed in an essay by Nora Amin on KRUMP, including interviews with Grichka Caruge and the work of a middle school class on the subject of racism, will be integrated into the creative process. 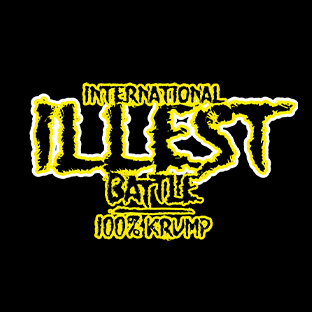 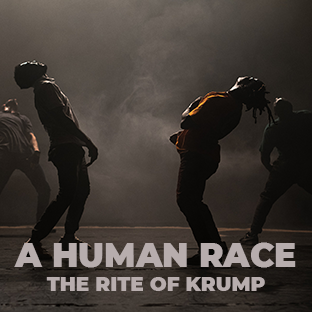 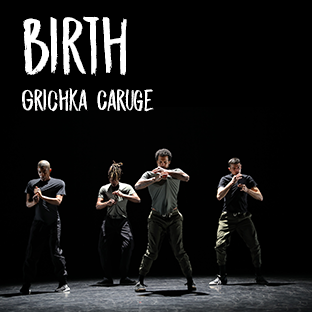