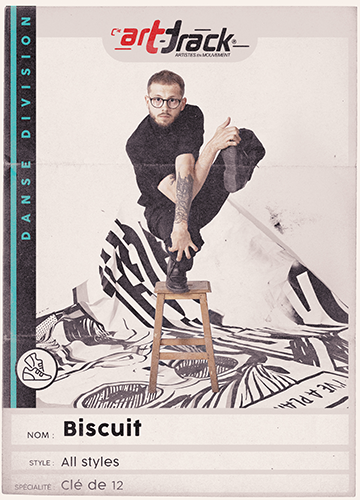 Born in Dunkirk in 1990, Aurélien Collewet (aka Biscuit) is a reknown dancer in the battles game for his contortionist style and his key work, he is also a breaker and soars in the air with surprising agility. It was his natural curiosity that led Biscuit at the age of 13 to dance in a local community center: after hearing music upstairs, he discovered a dance hall with breakers practicing. He will join them and take his first steps with them, feeling in this style completely autonomous and in control of his dance.

“I hung up quickly, I felt in my place, feeling that I had not known before, I felt that I was in the right place and that I could build something in the dance ”.

At the same time, in 2010 he began numerous collaborations, started to improvise on his dance, do theater, freestyle and standing dance. He will be a dancer for the film My piece of the pie by Klapisch, and will discover the universe of creation through the show What is this circus from the company Just1kiff before going on with it on scene at Solidays 2013 alongside Wax Tailor. He subsequently collaborated with many choreographers: Michel Schweizer, Marco Berrettini, Gianfranco Poddighe, Olivier Lefrançois, John Martinage, Sébastien Lefrançois, Booba Tchouda Lendrille, Farid Berki, Sandrine Lescourant (Mufasa), the Into New Territories formation within L’école des sables (Senegal) with Patrick Acogny, Germaine Acogny.

He draws on all these experiences and develops an eclectic approach to his art, very personal.

In 2019, he decides to make fruitful all these years of research in the creation of a first choreographed solo, Nodes, which will present his vision of life and dance. By opening this first door, he could well catch the choreographic virus. 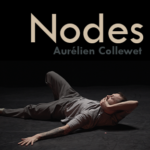